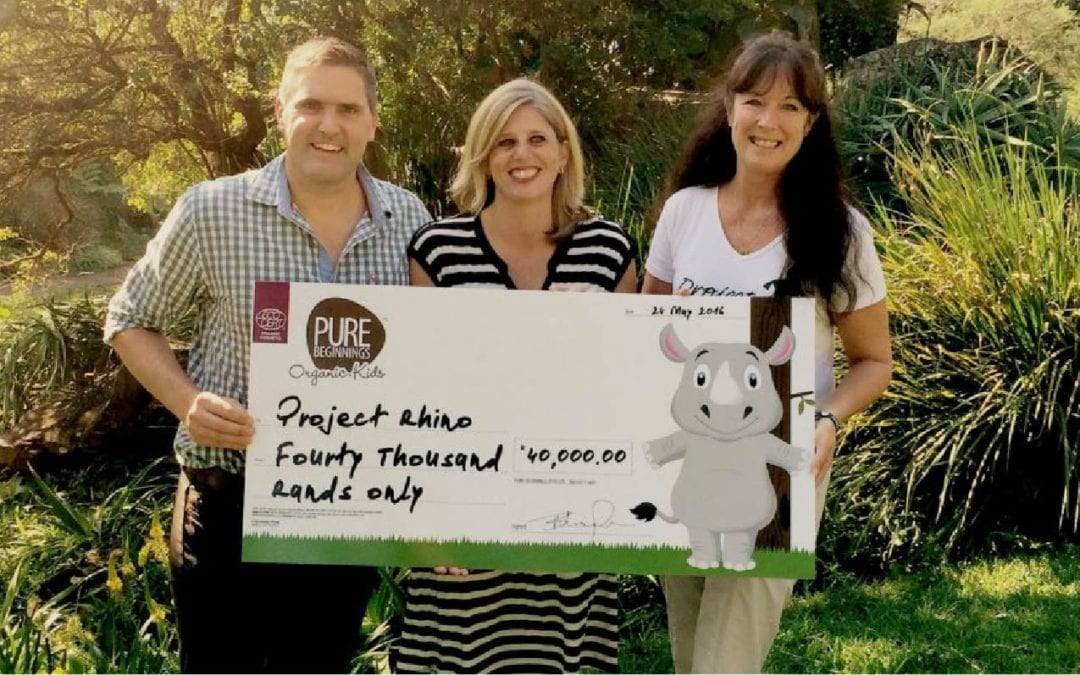 Today Pure Beginnings presented Sheelagh Antrobus from Project Rhino KZN with a cheque for R40 000 that was raised through the sales of their Limited Edition Ruby the Rhino Kids Wash. South Africa’s leading organic baby and kid’s skincare brand sold 4,000 units of the product to South African consumers through their retail network which includes Baby City, Babies R Us, Wellness Warehouse and independent health and wellness stores.

“We had an overwhelming response to the Limited Edition Project Rhino Kids Wash”, says Bruce Moore-Gordon, owner of Pure Beginnings. “It is really reassuring for us as a business that our consumers not only care about their children and the products they use, but are also looking at supporting important environmental and conservation initiatives.”

The product was launched by the brand in November last year after Bruce and Kate Moore-Gordon, the husband and wife couple who own the brand, felt that due to the increase in popularity of the brand they were now in a position to be able to use Pure Beginnings as a vehicle to not only give back financially, but reach a wide audience of children and families to educate and raise awareness about preserving and caring for our rhino. With a passion for the African bushveld and wildlife, and frequently spending time in the game reserves of KZN with their two sons, they felt deeply concerned about the plight of rhinos in KZN, which lead them to Project Rhino KZN.

Pure Beginnings has chosen Project Rhino’s Youth Education programme (called Rhino Art) as the beneficiary project for it’s donation because it focuses on education, awareness and empowerment of the youth. “These are all values which we as a brand feel very strongly about. We also feel this programme is where our donation will have maximum impact” said Bruce. The programme works in rural schools in KZN, especially those bordering our game reserves, as well as in countries such as Vietnam to educate the youth on the importance of biodiversity and rhino conservation.  It involves local communities that are at times silent witnesses to the rhino poaching war, increases conservation awareness amongst the youth and adds to the groundswell of public support needed to end rhino poaching and other wildlife crimes.

After the presentation of the cheque to Project Rhino KZN, Sheelagh said “We so appreciate the support of a local KZN family business. It means a huge amount to us, and as an organisation funded predominantly by individuals, the support of companies such as yours is invaluable.’’